What do you call a group of snowmen?

I know you can find a gaggle of geese, a pride of lions or a murder of crows. But what do you call a group of snowmen? I suppose it could be a team, a family or even an army. (That makes me think of the old Calvin and Hobbes cartoons where Calvin's dad would come home from work to find rows of monster snowmen in the front yard.) Well whatever the proper collective noun is, I wanted to share the snowmen ornaments I made this year: 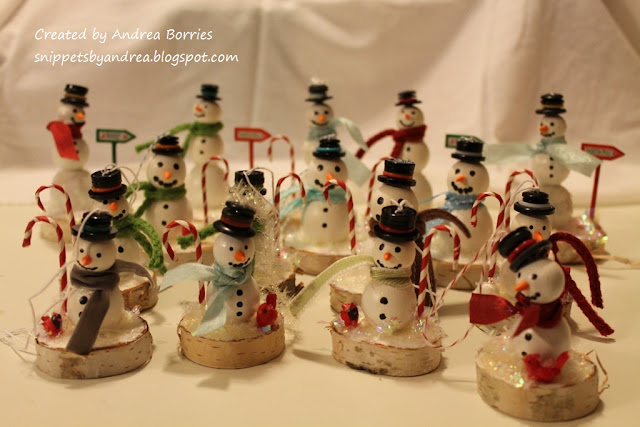 Aren't they cute? I have to say I was pretty pleased with the way they turned out. And I think all the recipients liked them, too. I don't have an official supply list, but I can give you a brief rundown of how I made them. 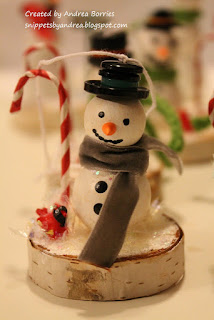 For the ornament bases I bought packages of birch rounds. I painted a rough coat of white acrylic paint on one side of each round to create the look of snow on the ground.

For the snowman bodies I used three different sizes of wooden beads/balls adhered together with hot glue; some of the ornaments used all three sizes, and others used just the small and medium or medium and large. I painted the beads with two coats of white paint, dry brushed on a bit of tan or light gray, used the end of a paintbrush to add the black buttons, eyes and mouths, and finished with a coat of matte sealer.

The noses are made with Simply Pressed Clay (Stampin' Up!), which I formed into carrot shapes, let air dry for a bit, painted orange and glued on the heads. 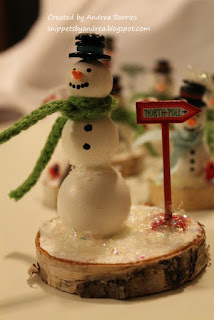 To make the hats I used a variety of buttons; three smaller ones for the top (two black and one colored) and a larger one for the brim. I tied the buttons together with baker's twine. For the smaller ornaments I left a loop of twine at the top so the ornaments can be hung. The larger ornaments are a bit too heavy to hang, so I left off the loop to make them standing decorations.

I used different colors and types of ribbons for the snowmen's scarves. My favorite was the Gumball Green sweater trim, which Stampin' Up! sold a couple of years ago. 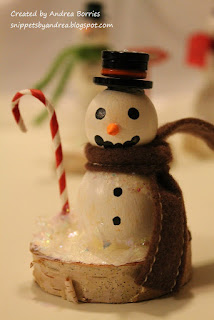 Once the snowmen were glued onto the bases, I added a few embellishments: paper candy canes, red birds and/or signposts. I found the embellishments at Michael's in a section of holiday miniatures, and they were perfect. To attach the candy canes, I rolled a small ball of Simply Pressed Clay, pushed the end of the candy cane in the middle and flattened the bottom. Once it was partially dry (just enough so the candy cane was secure and wouldn't fall off) I glued the clay to the base of the ornament.

The little plastic birds (which are my favorite) and the signposts are attached with hot glue. The signposts are metal and a bit heavy, so I only used those for the larger ornaments that wouldn't be hanging. 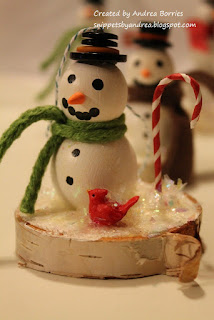 I finished off the ornaments with "snow." I used a combination of glitters and buffalo snow adhered with clear liquid glue. I used a few different kinds of glue; I just made sure that it would dry clear. I applied a liberal amount of glue over the base of each ornament, sprinkled on the buffalo snow, gently pressed it into the glue and then shook off the extra. I followed up with some glitter on the base and also glued glitter on the bodies and/or hats of the snowmen. I love the effect of the "snow," but I'm sure I'll be finding evidence of it in my craft area for months to come.

I'm almost finished posting my Christmas creations; I just have one more card design to share. Better late than never, I suppose. Sadly I just realized that I didn't take a picture of my last and favorite card design. And of course I don't have any of those cards left, either. Sigh. I guess I'll just have to recreate it.

Well, thanks for stopping by. And I wish you and yours a wonderful new year!

While breakfast is cooking and the family is gathering, I wanted to post a quick note to wish you and your family a very merry Christmas. I hope your heart and home are filled with the wonder, joy and peace of the season.

Posted by Andrea at 10:22 AM No comments: Links to this post

So far this winter we've had very little snow. We had one good storm after Thanksgiving, but the temperatures this month have been above normal -- more specifically above freezing -- so most of our precipitation has been in the form of rain. Definitely not the norm in December. We did get a slight dusting of snow last night, and it looks like we may get a little more later this week, but I'm not sure if we'll have a white Christmas.

To help tide us over until the snow comes, here is a Christmas card design featuring a large focal snowflake: 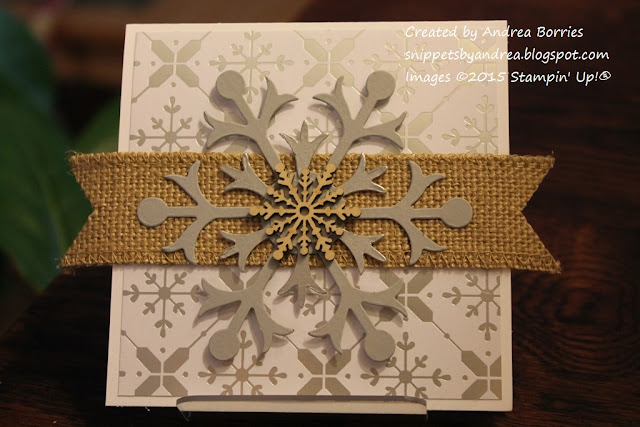 I love the combination of elements on this card. The rustic burlap trim and wooden snowflake complement the shiny foil-printed DSP and die-cut snowflake. (It's hard to tell in the photo, but the largest snowflake is Smoky Slate and the smaller one is silver.) Looking at the card now I think should have gone a step further and added a few rhinestones or silver sequins for a little extra bling.

The size of this card is 4-1/4" square, which worked perfectly with a 4" x 4" piece of DSP for the background. (I was able to get nine background squares from one 12" x 12" sheet of DSP). And since the card was smaller than the traditional A2 size, it still fit in an envelope even though the burlap extends past the sides.

Posted by Andrea at 11:00 PM No comments: Links to this post

I've had a very productive week Christmas-wise -- all my cards addressed and mailed, ornaments on the tree, shopping done (I think!), and packages picked up by the mail carrier this morning -- so I'm feeling a little less stressed and a bit more in the Christmas spirit. To save my sanity I did give up the idea that I was going to sew any gifts; I had wanted to make several little things, such as lip balm and tissue holders and coin purses. I figure I'll try my hand at those after the holidays and use them as little gifts throughout the year. Or just save them for next Christmas and get a head start.

I'm also going to try to get back on track with my blog and post twice a week. Wish me luck! For now, here is another of my Christmas card designs: 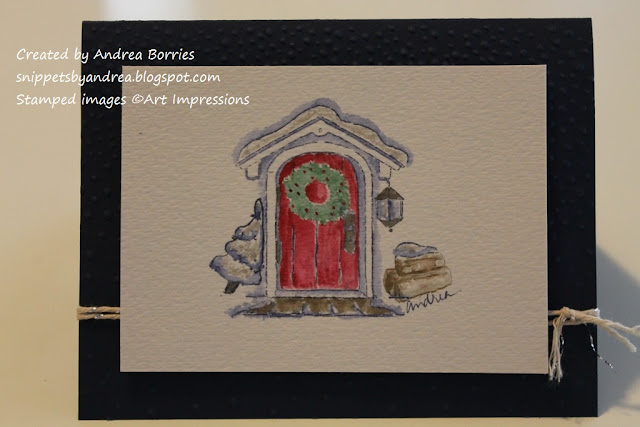 This focal image was one of the ones I practiced in the Art Impressions watercolor-style stamping class I mentioned in my Fall watercolors post last month. It's also the design that is on the packaging for the Wooden Door stamp set, although I changed the color of the door from a teal blue to red. I love red doors on houses, especially at Christmas time.

To keep the watercolor image the focal point of the card, I made the card base very simple. I used Night of Navy card stock, embossed it with the Gently Falling embossing folder and added a bit of silver baker's twine for texture. That's it!

Posted by Andrea at 10:37 AM No comments: Links to this post

In my last post I shared two cards made with the Santa's sleigh image from the Cozy Christmas stamp set. Today I have a card featuring another image from that set: a cozy cabin nestled in the woods. 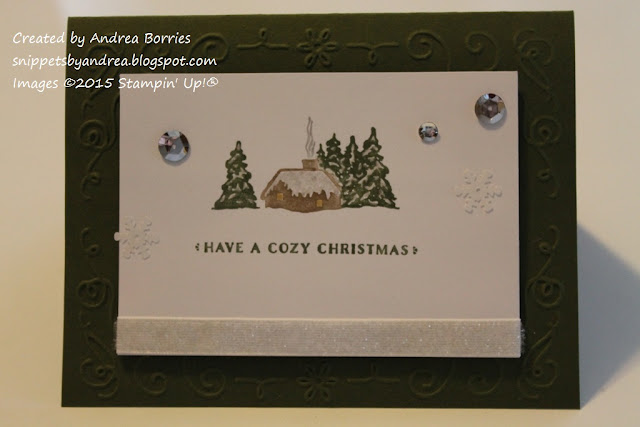 I love this image, and I wish I'd had more time to play with it. Oh well, maybe for next year's cards. For this design I used markers to apply ink directly to the rubber stamp and then stamped the image on Whisper White card stock. I added "snow" to the trees and cabin roof with a Gelly Roll pen and used a gold glitter brush pen to create the effect of warm light in the cabin windows.

To embellish the focal layer I add glitter ribbon and a few sequins. Then I used Dimensionals to attach the panel to an embossed card base.

Posted by Andrea at 9:20 PM No comments: Links to this post

It's only sixteen days until Christmas. Eek! How did that happen? I've barely done any shopping, the tree is up but not decorated, I have a whole list of gifts I want to make (but haven't started), and I don't think I 'll be able to put out my Lego village. And then there's my crazy work schedule on top of everything. Sigh. I'm feeling a little stressed about getting everything done, so my blog posts may be a little sparse until after the holidays. For now here are a couple of cards I made with the Santa's sleigh image from the Cozy Christmas stamp set: 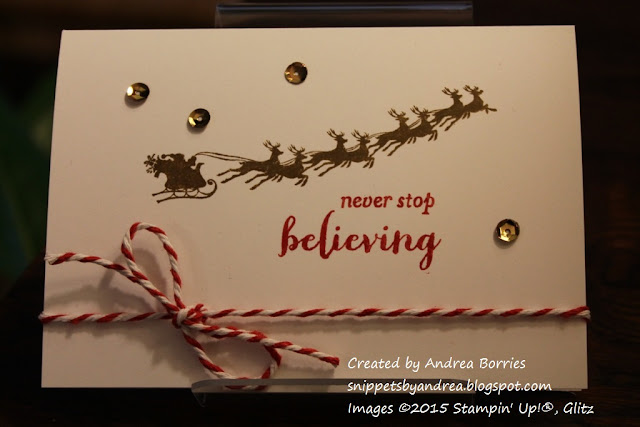 This was a very simple card design: two colors, two stamped images and two embellishments on a white card base. But I love the way it turned out; it makes me smile. 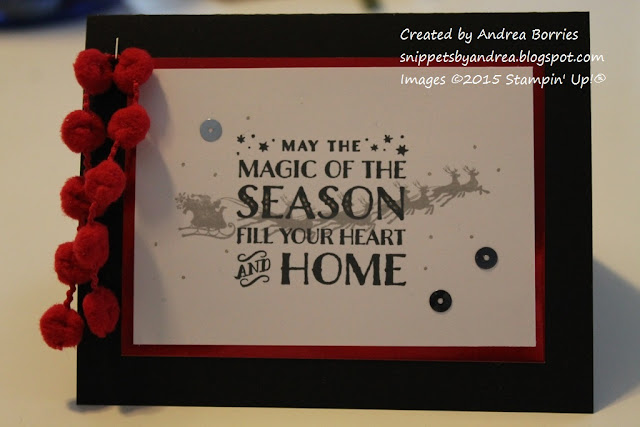 This card design has a few more steps, but I love the classic red, white and black color combo. I added sparkle in a few different ways: a layer of red foil, a few sequins, and accents made with a glitter pen on the focal image.

Posted by Andrea at 9:10 PM No comments: Links to this post 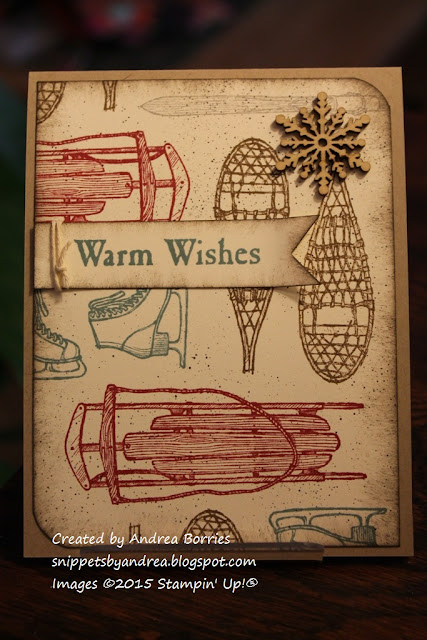 I've been struggling to write this blog post for the past couple of days. First I couldn't decide which card to share. (I think I'm just about done with my Christmas cards, so I do have several cards to post.) Then I couldn't wrap my brain around what I wanted to say. Sigh. I'm not sure why I'm having such a hard time with this post, but it's frustrating.

I've come to the conclusion that the only way I would ever finish this post is to just share a card design and my list of supplies. So here it is. It's a fairly straightforward design -- mostly stamping and sponging -- but if you have any questions, post a comment below, and I'll respond as soon as I can.

Posted by Andrea at 8:58 PM No comments: Links to this post

Andrea
I love to be creative with all sorts of crafts, especially rubber stamping. I feed my "habit" by being an independent demonstrator for Stampin' Up!® I enjoy writing and have always wanted to write and publish a children's book.

Save the Manatee Club 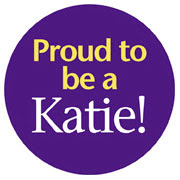